When I started researching this series I was interested in what has became of institutional critique- a  strand of artistic practice centred on critiquing institutions like museums, galleries and the art market, usually from within. Part of my interest stemmed from reconciling myself with being resident in an establishment like Somerset House, with its august past and all the expectations that seem to go with it (at least to outside observers), and the fact that generally I tend to show work, or do talks, mostly in institutions…

So one of the questions I had was how artists balance working within the structures, institutions and existing frameworks of their day while attempting to also critique them- and without being totally hypocritical in the process? Institutions both provide visibility, support, a space for experimentation and of course validity as an artist, which is crucial for those with diffuse practices, working across performance and writing; however their legitimizing role can also be one of sterilising and in the worst cases, coopting and instrumentalising.

With these thoughts on my mind, I’d read Living a Feminist Life, by Sara Ahmed, which describes in lucid detail the pressures of existing as a lesbian woman of colour within an institution- in her case, Goldsmiths, and her eventual departure from it- fittingly, given the current news, bc of their intransigence in the face of accusations of sexual harassment and assault within it.

What I liked about her book was it’s account of one person’s way of living, that is neither unrealistically unoptimistic nor hopeless, given the challenges she faced. As an ethical proposition of how to live, I got to thinking about texts from faith traditions that I’d read and which have helped me over the years but I’d been too shy to talk about public, bc of my ambivalence towards organised religion, and the politics of spirituality (which are usually, ‘no’ politics, a position that is dangerous in today’s climate). These were books like Dark night of the Soul by St John of the cross, The Interior Castle by Teresa of Avila, the Tao Te Ching, The Way of the Bodhisattva  by Shantideva and many more.

I’m not sure Ahmed intended her book to read as a spiritual account or how-to manual- though there is a section on how to be a killjoy- but as an inspiring and affirming text, it seemed to me to share some of those qualities of personally-drawn insights which can nevertheless collectively guide others and therefore function pedagogically in some way.

Following more research into the lives of saints, I became interested in the pedagogical function of medieval hagiographies, and the ways that they both described a particular, though generic life, and were intended to instruct other lives- a bit like the texts I mentioned earlier, but also perhaps like self-help literature does now, which almost always draws from the writer’s personal biography (or “journey” in the industry lingo) in order to deliver some life lessons.

I was also interested in how female saints must’ve walked a tricky line between displaying- or performing- their mysticism in order to to be believed and accepted as holy women, and having to stay within the confines of accepted orthodoxy- prescribed, of course, by the major institution of its day: the church, and its gatekeepers, the male priests. 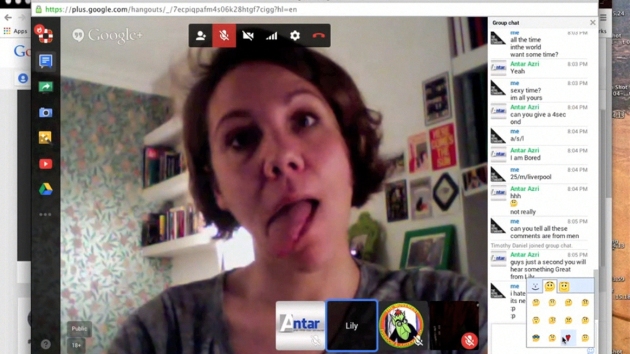 live public google hangout performance: repeating back every gesture and word, that others in the call spoke or wrote.

As most lives of the saints were written by men, to what extent did their ventriloquism of the women’s experience legitimise it and help grant the mystics religious authority? How did female mystics, perhaps through no fault of their own, become mouthpieces for the church? What happened in the cases when they crossed the line from divine possession into what was considered demonic possession? 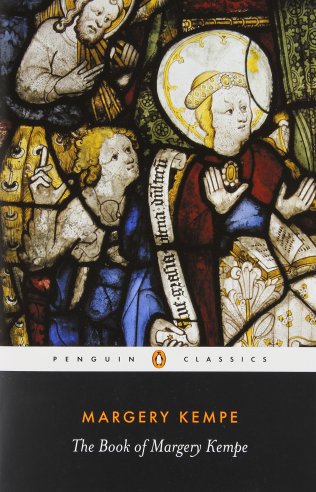 Given my work’s focus on archives and outsourced autobiography, another aspect which interested me was the role of hagiography as life-writing, and how it relates to the branding and representation of the self. When I told Alicia and Sarah about my book project The Outage, where I commissioned a ghostwriter to write my fictional memoir gleaned only from my online presence and digital footprint, Alicia said, oh, you have your own hagiography!

So, how are memoir, ghostwriting and hagiography connected- and could autohagiography, as in the case of lay holy woman Margery Kempe (c. 1373–after 1438)- whose ‘Book’ is considered by some to be the first autobiography in the English language-  be seen as a precursor to the self-branding afforded by social media- along with the tendency to dismiss it as a vanity project, especially in the case of women? 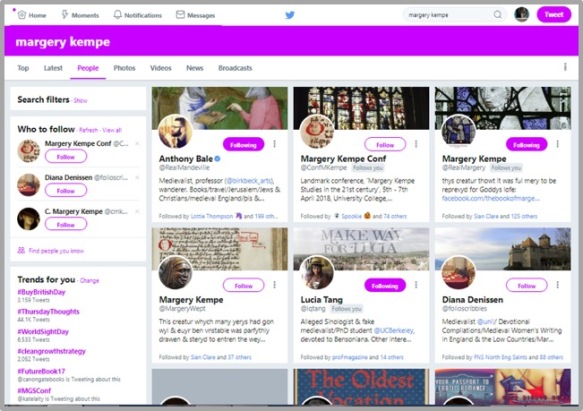 The role of the female body in medieval mysticism was also of interest to me, because of the way it seemed to both create a route into religious authority for women while potentially trapping, or limiting them.

Somatic mysticism, which was primarily displayed through miracles involving the body as in the case of St Christina the astonishing who both endured physical pains of extreme heat, cold and lactated salvific oils from her breasts, was especially associated with female saints. The female body was believed to be more soft, porous and pliable, perhaps echoing the ways that many centuries later, women found a prominent role in spiritualism and mediumship, and then telephony and telegram operation, because their apparent lack of intellectual and physical density made them better ‘channelers’ and transmitters of the message.

Christina the Astonishing from 1630 Fasti Mariani calendar of saints.

In my own work I have explored the idea of channeling and automation, thru using software like predictive text, algorithmic readings of my daily diary, automated search tools, or generated bot texts (as with my Empathy Deck Twitter bot) as way of exploring personal experience channeled through sociotechnical interfaces. Questions of authenticity, agency and control recur in this work which asks how subjects can speak of lived experience with their ‘own voice’ as well as with and through what traverses them. (as Paul B Precaido says “I’m not interested in my emotions in so much as their being mine, belonging only, uniquely, to me. I’m not interested in their individual aspects, only in how they are traversed by what isn’t mine’.)

The Fox sisters, famous for their role in the Modern Spiritualism movement.

If medieval assumptions about the female body created both possibilities for agency and for further entrenchment of stereotypes about femininity, this tension resonates today and through generation of feminist artwork, with many female-identified artists grappling with questions of embodiment and the representation of the body in their work.

The series’ title Dream Actions is drawn from a passage by feminist writer Shulamith Firestone, quoted in Ahmed’s book, which also centers on a bodily gesture, or rather the refusal of one: her ‘dream’ action for the women’s liberation movement was a smile boycott, “allowing women to instantly abandon their ‘pleasing’ smiles” and by implication wider gendered norms of bodily behaviour.

How can exploring the lives and embodied visions of medieval female mystics provide another window onto how female agency has been expressed, accounted for and represented?

Hopefully this intro has given an overview of my interest in some of themes coming to them as a newbie, but to discuss them in more depth with people who actually know what they’re talking about, I have invited two scholars:

Sara Salih, who is a Senior Lecturer in medieval English at Kings College London, with a long-standing interest in mystical writing and its reception and Alicia Spencer-Hall, author of Medieval Saints and Modern Screens, she specialises in trans-historical critical engagement with literature of the Middle Ages.