This is the text I had on my iphone at the launch of The Outage, my ghostwritten memoir drawn entirely from my online presence, at Banner Repeater. I’ve resisted the temptation to modify it from it’s 10 minutes reading length, because I quite like it as a record of what I was thinking about at that moment in time, before other people had read the book, asked me questions about it and before certain other- related- life changes took place. I don’t really flesh out many of the points I mention, they’re more like starting thoughts for conversation, and there was plenty of that after I read this bit of text and myself and the writer, J. A. Harrington, read sections from the book.

In case you don’t know what this book is about, I employed a ghostwriter to write a fictional memoir based entirely on my digital footprint- everything that it’s in the gallery is also in a shared Dropbox which he had access to, plus whatever else his own research brought up. The result is, as my friend said, intentionally mimicking PR speak:

“a ghost written text that draws on the personal and practice-based online activity of its subject, with a view to performing the distance between artwork and artist” (thanks Lizzie Homersham!)

That question of distance between artist and artwork, between work and life when you use yourself in your work, is key to me and is what I probably found the hardest, and most interesting part of the project.

I wanted to start off by saying plainly that this project has had a pretty big effect on me.
When I first I read the book I freaked out. It was like reading my own obituary, written by someone pretending to me. Or seeing your reflection in a cracked mirror and not being sure if the picture still hung together as you or produced something very different.

My hands were shaking as I read it and I had to lie down and call 5 friends- I was happy and even thankful that it was exactly what I’d wanted without having realised at all that that was what I’d wanted.

There’s perhaps a playing out of the false intimacy and connection of online interaction- imagining you could know a person by trawling through their random tweets and blog posts, which is kind of what we do when we stalk people we fancy or are envious of.

Though as Rob Horning puts it, the postauthentic, mediated intimacy of today is something different- it’s “going over someone’s social media offerings and reassuring them that none of it seems much like them at all”. Or maybe I secretly thought I was a precious snowflake that someone else couldn’t suss out just from their online presence.

Of course that’s only half right since I actively use social media as a site for a certain kind of self-performance, which is nevertheless not necessarily calculated, or any more than my self-performance in general is- either way, I never imagine what I’m putting across is some authentic self- mainly because I don’t believe in such a thing anyway and see it as a historically contingent construction (to oversimplify).

The thing I’m interested in is a sort of collective or shared subjecthood, and how we can’t separate our own dreams, ideas, beliefs, desires from anyone else’s, and the role technology and consumerism plays in shaping it. If the self is performative and iterative and endless citation, then doesn’t that imply there’s no interiority to worry about, no essential me to try and guard and put limits up against? Why not make that performance of self available to some else to have a go at constructing something from- after all, it’s just fiction anyway isn’t it?

Well that’s what I thought to begin with- but there’s stuff about real people like my mum and others in the book that I felt genuinely unsure about, which then begs the question why I’d put it out there and made it public in the first place.

But things written in personal blogs, or offhand maybe even drunken tweets, or even within a project- like my #winning one, a kind of undercover one that nevertheless appears a fair bit in the book- have a completely different visibility online and weight from a carefully written artist interview on a widely-read website.

Presenting them as one coherent text, which is what this book does, erases this context specificity and confuses the line between considered and unthought out remarks, between personal experience and work, between other people’s words and my own. This points to the collective self in it’s form, in a way that I like and thought found worked- but on a personal level it was disorienting; I couldn’t work out what were my words, what were the writer’s and what was some one else’s- in some cases I had to go back over blog posts to check and was particularly disturbed to realise that one section I was sure I had written, he had written.
I also couldn’t separate myself from my work and felt self-conscious for probably the first time ever, and wondered if I had actually turned myself into something and now couldn’t work out if there was any of me left- any of me that wasn’t work. 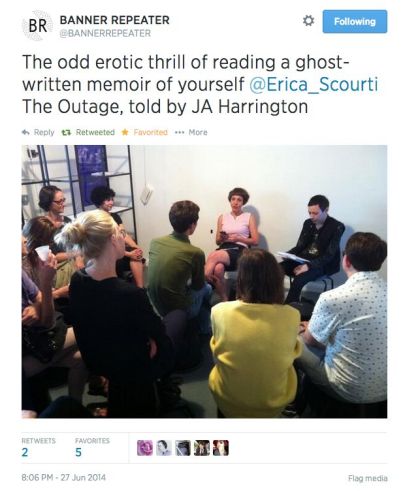 And if there was, whether I had been really stupid to give this up to someone else to represent- it could have gone very wrong. Giving up control of your work, and therefore to an extent your self if you appear within it, is inherent within the online context anyway, since you can’t determine where your stuff will end up- like footage from one of my projects being used in someone’s George Michael cover video- but to explicitly hand over the task of representing yourself to someone else, without telling them what to draw on or to make you look good, or tweaking it afterwards to reflect a more desirable version- and then putting in print a version of myself that I can’t go back and delete or modify after I grow out of my opinions- was intimidating in itself. Books have a finality and authority and I just gave that away- a gesture of negating what Brian Driotcour’s describes as “the self-important phantom self that requires consistency and autonomy, limits and boundaries”

What this project made clear to me as that no matter how in control of your online presence you think you are, you cannot control what another person will make of it. This taps into the survellient anxiety of big data that Kate Crawford, amongst others, has spoken of- the sense of being watched and parsed at all times- albeit not by humans (unless you’re someone very important or dangerous) with conclusions being drawn about you, that you’re unaware of, until you get the spot on Amazon recommendations. We don’t know what choices Google is making on our behalf based on our URL histories, when we do a search, but we know it’s ‘tailored’ to our preferences- we don’t know what they picture they have of us, but we know there’s a picture. Everyone is producing an image of themselves for an algorithmic gaze intentionally or not, and to think that because you don’t use Facebook you’re safe is wishful thinking- as the CEO of the SP-index pointed out, lack of social media presence is itself a very strong identity marker- usually that you’ve got something to hide.

This comes back to privacy- and what constitutes in the age of big data. What do we have a right to keep private- not just from other humans but from algorithms too? (as that is always the defense- no human sees it…) How are leaking ourselves into public or semi-public space without even realizing it? And how is that unconscious performance being monetised?

Ellen Feiss said recently that digital privacy is an explicitly feminist concern, continuing a project of connecting private life to public life, the personal as political; self-representation, autobiography and the confessional mode are also historically feminist concerns, and they also all come into play in various ways in this project. Female artists’ self-representation has also often been evaluated as narcissistic or vain and this project does seem kind of vain, even hubristic, at first glance- not just employing someone to do you a vanity search but getting them to construct something coherent out of the results too! Get me!

And who writes a memoir- particularly when still young-ish- if not someone who thinks they’re a special person, a celebrity? At the same time, celebs are consumable human images, branded lives, whose sell by date is surely soon coming- after all, publishers get the memoirs out quick, before the public forgets, while there is still a buck to be made. This is especially true of the reality TV star, who must endlessly perform themselves as their work until the public tires of them. Maybe there’s something of that in artists who appear as themselves too- which some sections of the book explicitly touch on, as I’ve written about this before.

There’s a lot more to say I could say about this project but I’ll shut up now and you can ask questions afterwards. We’re going to read a bit now.